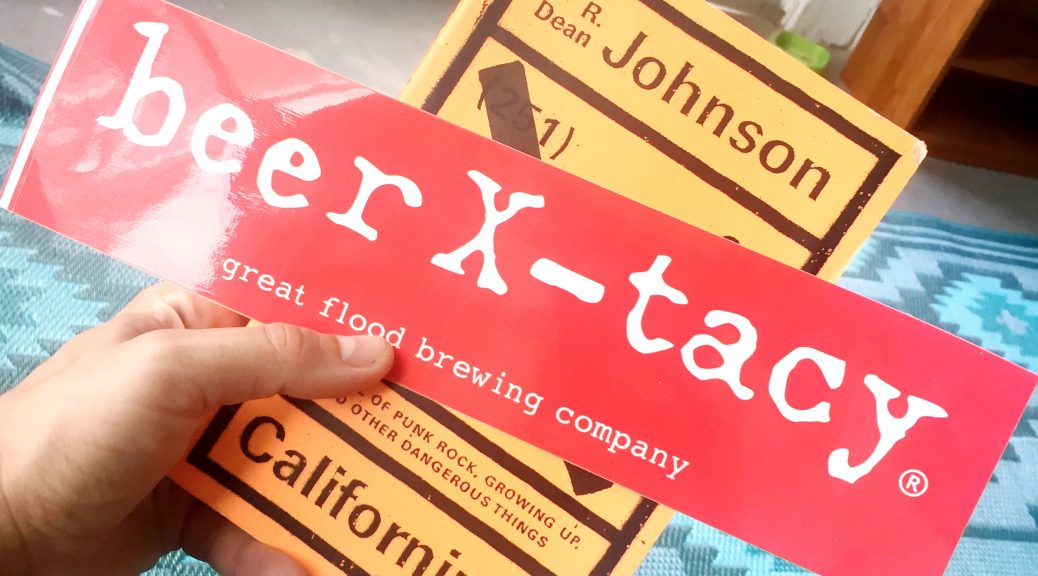 I used to do this thing where I’d pair books and beers, but life got in the way for a while and I had to stop doing it. Things have freed up lately, though, so I figure it would be fun to get back at it. To hitch my wagon back on the horse, so to speak, even if I was the one to unhitch it in the first place.

I gotta be honest. I don’t really understand that saying. I guess that’s beside the point, though, so here’s a book and a beer to check out.

I read this one when it came out last summer, and I’ve recommended it to just about everyone I know since. Set in 1982, Californium is a punk rock themed coming-of-age novel about fourteen year-old Reece Houghton, whose family has just uprooted from New Jersey to California. Like most fourteen year-olds, he meets new friends, develops a crush or two, and works toward finding a social circle that fits him. And, with his friends Keith, a lovable goof, and Treat, a mysterious, mohawked punk rocker, he starts a punk band: Dik Nixon.

There’s a lot to love about this novel. While it contains some familiar elements (kid moves against his will and has to find new friends), Johnson does a great job of intertwining the family drama unfolding for the Houghtons. Without giving too much away, let’s just say they moved for much more than a job opportunity. Framing the whole thing in punk rock culture, too, adds an interesting edge. Reese isn’t just growing up; he’s figuring out who he is and how to express it, which is fitting for a punk story.

I’m a sucker for punk — I grew up in the 90s, so I was a little after the book’s era, but I was definitely a punk kid when I hit high school — and this book screams punk. From the family drama to the thrill of starting a new band and Reese figuring out who he is, it’s punk rock through and through.

Simply put, it was my go-to read last summer, and I’ll definitely be revisiting it again before this summer wraps up.

So, Great Flood cans and distributes a couple of their beers, but I couldn’t pass up the opportunity to pair this one — a juicy, dry-hopped saison — with Californium. This beer’s the second in Great Flood’s beer X-tacy line, which celebrates the iconic Louisville record store, ear X-tacy, that closed a few years ago. ear X-tacy helped make Louisville what it is; from drawing in top-notch bands to helping establish the “keep Louisville weird” motto and more, they were icons of the independent record store industry. I’d like to think that Reece, Keith, and Treat would have liked it if they ever had the chance to pop in. Since it’s gone, though, the fellas over at Great Flood have teamed up with John Timmons, who owned ear X-tacy, to come up with an exclusive brew.

It’s been crazy hot here in Louisville lately, and beer X-tacy’s a pretty awesome beer for beating the heat. It’s a juicy one, reminding me a little of the NE IPA craze that’s been going on lately, and it has a nice little bit of funk that you’d expect out of a saison. It clocks in at 6.5% ABV, so it might be a little strong, but it’s a flavorful, light beer that’s definitely a good go-to this time of year.

That’s all I have for you for now. Have a beer or book you’d like to recommend? Hit me up in the comments, or over on Twitter at @adamshaw502.